Today saw the start (with bells and whistles and awkward dancing) of the 71st RIPE meeting in my home town of Bucureşti! There's no better way to attend what's my first full meeting (only been for a day to RIPE69), so I do hope that I will be forgiven for posing as a newcomer.

I really love the logo work (very tastefully inspired from Romanian folklore) and the other little bits and pieces that make this event special. Many thanks to Interlan for hosting the meeting and for the laughs at the opening plenary today. 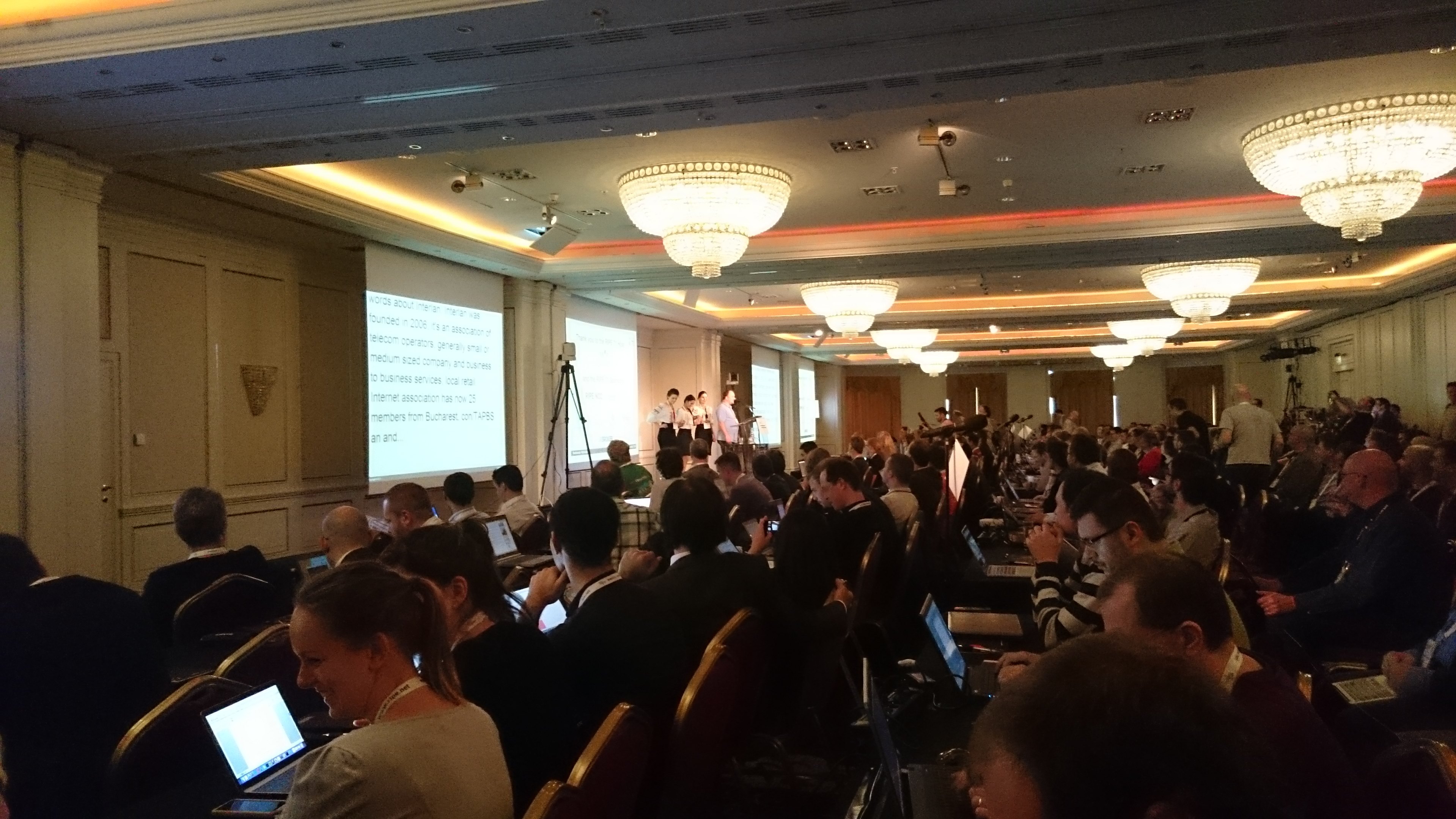 The Marriott hotel is quite nice and fancy, the food was great (although I'm sure that piggy must've had a second leg somewhere that people were wishing would appear) and the plenary was packed in the first afternoon session. With 330 having arrived today already and about 200 more to come, I'm wondering if we'll actually fit in tomorrow.

The wireless Internet was great, although I had some weird problems (laptop didn't like the 5GHz band) and while I stayed on the IPv6 only SSID for the whole day, I could only do that via my laptop - oh Android, what gives?

As written on the tin, the v6 SSID is experimental and comes without warranty, but I'm hoping that some stats and other useful metrics will come out of it!

All of the talks are recorded and made available online at a ridiculous pace, together with the slides and transcripts (good source of funsies especially when someone drops acronym bombs).

You can also stream them live during the day and participate via the IRC channel, all details over here.

As far as talks go, I really enjoyed The State of Mobile Satellite Internet - I used to make fun of the UK using the term broadband for fixed line 1Mbps speeds, little did I know that in the satellite world it might mean 492kbps if you're lucky. That will change with the next generation of things-that-rotate-above-our-heads-but-appear-stationary which allow speeds up to tens of mbps. If you're lucky and it doesn't rain apparently, which causes total loss of service. Right. There's other stuff like forced routing and something about Skype being a pain to block, so go watch it.

Another talk I liked was Automated Certificate Management - it's about ACME and LetsEncrypt. Nuff said, it's a hot topic at the moment and well worth knowing about. As with all things about certificates it has its wtf moments and there are still some worries about the security of the whole process (it's no worse than before, while improving many other aspects, so there's that).

Some interesting research was done in the IXP world, both lightning talks on the subject (Traffic Volume Dependencies of IXPs and BGP Security at Internet Exchanges: a practical experiment) are worth watching as they provide some interesting (and somewhat worrying) food for thought.

Intel's DPDK and OpenFlow are pushing the limits of what packet pushing can be done on servers and I wish the presentation talked more about how that is achieved. By now my attention span was already reaching critical levels so details on the remaining talks are getting rather fuzzy.

FastNetMon sounds like a good toolkit to have in the fight against DDoS attacks and I'm happy we got not one, but two examples of real life usage. Nice to see Vicente there with a talk he is about to give at our upcoming iNOG meeting in Dublin on the 1st of December!

For another jam-packed day of cool presentations. Read about days 2 and 3 here!

Oh and if you're around and I haven't said hello yet, get in touch!