I do most of my development under Linux so I have python out of the box and git is only an apt install away. But recently a colleague needed to generate configs based on templates built by yours truly (Jinja2 syntax) so I pointed him at my gencfg script on GitHub. What I realized only later was that he only had a Windows machine and no idea how to create an environment to fetch repositories, install dependencies and run python scripts. Let's fix that.

!!! 2021 UPDATE !!! If you're on Windows 10, then I recommend you use the Windows Subsystem for Linux for all of your coding and automation needs. I've written an article on how to set up WSL together with Windows Terminal, Docker Desktop, and VSCode.

So gencfg is a python script, with one dependency (library) and it's located on GitHub. In order to run it, we need a functional python environment (I made it so that gencfg runs in both python 2.7 and 3) with pip (the python package manager) so we can install the Jinja2 library.

First, download the Windows python installer from www.python.org and run it.

Once it's done, you could open a command prompt now and run python scripts from it, but we're not there yet (and we can do better than good ol' cmd).

To get the scripts from GitHub, you have two options: you download a zip manually from the website or you use git to fetch the repository. You don't need to learn git right now, but it's a very useful tool, well worth investing a bit of time in (for the basics).

Use the Git Bash shortcut and customize MinTTY (the Consolas font is pretty good on Windows) - you get a resizable window with a bash environment, this is great. But if you want to use cmd then git should work there as well (installer adds it to the PATH).

One caveat if using Git Bash with MinTTY: python doesn't go into interactive mode (more on stackoverflow) so a solution is to force it start that way: echo alias python=\"python -i\" >> ~/.bash_profile

If you want to know what gencfg does, I wrote about it in the post Automation, one step at a time (1) after presenting it at iNOG::6 - in short, it generates multiple configuration files using a template fed with data from a csv file.

The first step is to clone the repository (also known as downloading all the files and their history). Open the Git Bash window and navigate to the directory where you wish the scripts to live in.

The repository is now found in the gencfg directory, so the next step is to install its dependencies using pip. They are provided conveniently in a text file named requirements.txt.

Finally, rejoice, for you can now run the script! I've included example template and csv files which are used below to generate 10 configs.

This is how it looks in the actual window from start to finish. 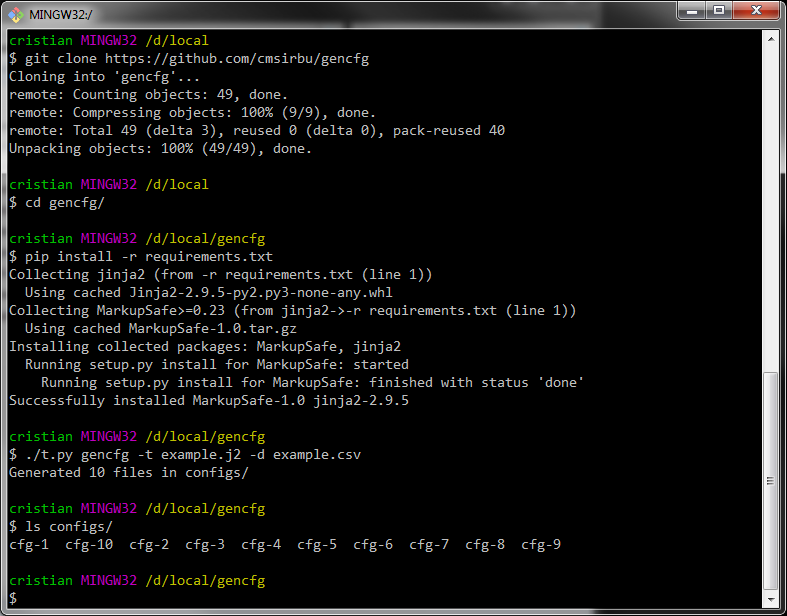 You can get MinTTY to be multi-tabbed and look better by following the steps in A usable and good looking shell on Windows. There's no need to install Cygwin, but if you already have it (or you'd rather use it as an environment) then it has its own python and git packages you can install (but they won't be available Windows-wide).